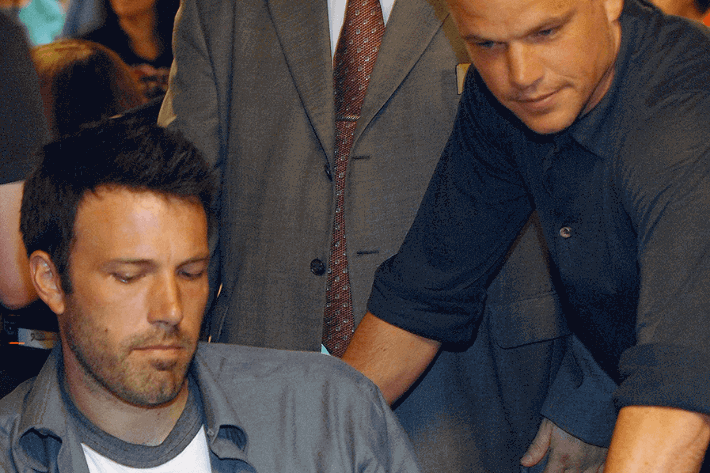 The ancient roots of poker can be traced back all the way to the 10th century. Throughout much of its history, the game was a low-stakes affair reserved for Wild West saloons and the back rooms of casinos. But today, poker is a pop-culture phenomenon. It attracts millions of television viewers from around the globe, and the list of celebrity poker players includes Hollywood big shots like James Woods and Ben Affleck.

The rich and famous love to gamble. And some of them are pretty good at it, having won millions of dollars at poker tables. These celebs stand out as truly outstanding players thanks to their unique playing style and high-profile wins. We narrowed down the list to the top 10 celebrity poker players.

Spain’s Gerard Pique is an internationally acclaimed football player who currently plays with European giants Barcelona. He is known for both his football skills and his marital life. In addition to being one of the world’s best defenders, Pique is married to Colombian pop star Shakira.

His poker accolades are equally impressive. Pique first expressed interest in poker when he was playing with Manchester United, and he quickly exhibited skills that placed him among other high-rolling celebrities playing poker.

The footballer managed to earn more than $250,000 in poker tournaments like the European Poker Tour and the World Series of Poker. According to Pique, both poker and football get his adrenaline pumping.

If you are a fan of cinema, you’re probably familiar with the name James Woods. This Hollywood actor/producer is known for his big screen appearances and his love for poker.

He’s been a member of the celebrities poker club since 2004, taking part in more than 200 poker tournaments, including the Grand Slam of Poker, The Commerce Poker Series, California State Poker Championship, and the Borgata Poker Open. Moreover, Woods regularly participates in the World Series of Poker Circuit tournaments as well as other poker tournament series and events.

In addition to being an A-list movie star, Ben Affleck is among the poker celebrities who really don’t like losing at the table. During his early poker days, he was allegedly accused of reading cards and thrown out of a casino as a consequence.

But these days, Affleck is a serious poker player who is very cautious once the cards are dealt. He reportedly prefers playing against fellow actors and producers, usually for a hefty sum of money.

Affleck took part in many major poker tournaments, including California State Poker Championship where he won $356,400 playing against other famous poker players. So far, Affleck earned around half a million dollars playing in live poker tournaments and taking part in high-stakes private poker games.

You probably know Jennifer Tilly from her appearances in The Haunted Mansion and Liar Liar. However, acting isn’t Tilly’s only talent. She is equally passionate about cash games, which makes her the most famous poker player actress out there.

Tilly takes her poker career very seriously. Since 2003, she has taken part in a number of major poker tournaments, such as the WPT Foundation Ladies Night Invitational, WPT Hollywood, Bellagio Cup, and the GSN Poker Royal series. She was even nominated for the prestigious Spirit of Poker Living Legend Award in 2014. In addition to cash, Tilly won a WSOP bracelet in a highly-competitive Ladies No-Limit Texas Hold ’em poker event.

She loves a celebrity poker showdown and prefers high-stakes games where she earns more than a million dollars.

Shannon Elizabeth is an actress and former model best known for her roles in The American Pie film series and Scary Movie. But few people know that she loves a good poker game. Elizabeth managed to make a name for herself as one of the most successful celebrity poker players in the world.

She makes frequent trips to Vegas – at least three times a month – in order to enter live tournaments and play for big bucks. The actress took part in major tournaments, including the famous NBC National Heads-Up Poker Championship, the first Annual Nicky Hilton New Year’s Eve Poker Tournament at Caesars Palace, and the Celebrity Poker Showdown.
Having won more than $235,000, Elizabeth is regarded as one of the top female celebrity poker players.

In addition to his A-list celebrity status, Tobey Maguire is a vetern of the poker industry. The Spider-Man star has been playing for more than 15 years, and during that time, he earned a reputation for being an outstanding poker player who doesn’t like to lose. He is estimated to have earned millions from the game.

Successful both online and in live tournaments, Maguire prefers high-stakes games with big pots and players with huge bankrolls. He is a regular at major poker tournaments like the WPT Mirage Poker Showdown and the WPT Legends of Poke, which host many other poker-playing celebrities.

Aside from tournaments, Maguire enjoys playing private games, especially with his fellow actors. He was even in charge of the famous Viper Room events, formerly led by Molly Bloom. The games were shut down over a money-laundering investigation, but the story was brought to life on the big screen in the 2017 biographical drama Molly’s Game.

Teddy Sheringham is another important addition to our top poker player list. In addition to his success at the tables, Sheringham knows his way around the football field. He played for a number of Premier League teams, including big names such as Manchester United and Tottenham Hotspur.Sheringham started joining poker tournaments back in 2005.

He was especially lucky at the European Poker Tour (the various No-Limit Texas Hold ‘Em events), where he won around $118,000. He also participated in some of the best poker games at the World Series of Poker in Europe and Las Vegas. Although Sheringham has not been active recently, he is estimated to have pocketed more than $320,000 from poker.

Jason Alexander is an American comedian, singer, actor, and director who is best known for his role as George Costanza in Seinfeld. He is also a true poker professional.
Out of all the celebrities that play poker, Alexander is considered to be especially fierce when it comes to competing in televised poker events. As a Celebrity Poker Showdown contestant, he won $500,000 to donate to his chosen charity. Many of his matches are available on YouTube, and he was even offered a number of sponsorship deals.

Another American actor who belongs on the celebrity poker players list is Gabe Kaplan. Famous for his appearance in the beloved 1970’s sitcom Welcome Back, Kotter, Kaplan is regarded as one of poker’s elite players who took part in some of the most prestigious events and tournaments, pocketing almost $2 million.

Kaplan first appeared at the World Series of Poker in 1978, and it didn’t take long for him to score several substantial wins. His first major cash out was in 1980, when he won the main event at Amarillo Slim’s Super Bowl of Poker and established himself as one of the best celebrity poker players. He had 11 WSOP finishes and earned a total of $539,159. He also took part in the World Poker Tour, where he managed to win more than $250,000.

Moreover, Kaplan made three appearances on Poker After Dark and won every time. His third appearance in 2010 went down in history as the greatest comeback on the show where he triumphed over five skilled poker players – Joe Sebok, Mark Gregorich, Howard Lederer, Kara Scott, and Ali Nejad.

The late Telly Savalas is widely remembered for his role in the iconic 1970’s detective show Kojak. But he was also one of the world’s most famous poker players.
Savalas participated in many poker tournaments, including the World Series of Poker, where he made three notable appearances.

The first was in 1985, when he secured 3rd place in a $1,000 Limit Seven Card Stud Hi/Lo event. The second was two years later, in a $1,000 Seven Card Stud Split event where he won 5th place. During his final appearance in 1992, Savalas was 21st in a $10,000 No-Limit Texas Hold ‘Em World Championship event. His winnings of around $40,000 earned Savalas a reputation for being a skilled card player

Who is the most famous poker player?

Who is the richest poker player?

Most movie stars and athletes don’t make a living from playing poker. Their net worth depends largely on their day job. But some have won a lot of cash at the table. Although Ben Affleck isn’t a professional poker player, a portion of $130 million came from poker. That makes him the richest poker player on our list. Meanwhile, Gabe Kaplan earned more than any other celebrity at poker tournaments and events – an estimated $2 million. This also goes to show that the best celebrity poker players aren’t necessarily the richest.

Who is the greatest poker player?

Poker is an amazing game that continues to attract new players every year. When the competition is so fierce, no amount of luck and skill can guarantee that a player is going to emerge victorious. Therefore, it’s not easy to choose only one person as the ultimate poker player. When it comes to celebrity poker players, Tobey Maguire and Jennifer Tilly are widely regarded as being the best poker players.

There are not comments yet.